Writing novels is one of those jobs where steady wins the day. Keep writing, keep attacking, keep stretching, keep engaged. However, sometimes life disrupts even the most determined schedule. Such an interruption occurred in July when the Carr Fire exploded in Shasta County, California, my home of eight years.

It started on Monday to the west of Redding, and almost immediately the first evacuations began for those living in the foothills and mountains. But it was a long ways from our home. Then on Thursday, it wasn't—far away, that is.

We began packing that morning, but we were fairly confident we would stay another night (one of us staying awake at all times during the night). After loading and preparing our little travel trailer, I towed it across town to our son's house. The camper has been our home away from home a few times, and comes in very handy.

At about 7:30 we noticed the sky darkening. The TV was on the local news station, but there were no new updates about the fire, which we thought at that time was well over 5 miles away. I noticed the wind pick up—it had been dead still—and went out the back facing west toward the fire when I heard helicopters. Three or four helicopters were dropping water within a mile, but the smoke was so thick we couldn't see flames. Then the power went out, and my wife said, "Time to go."

We hustled out front where our cars were parked in the driveway. I remember the police chief coming down the street yelling, "Get out now!" Because the power was out, I had to manually close the garage doors.

There was more drama—such as Sheryl leaving first and not knowing I stayed a couple of minutes to pull down blinds and close the garage doors—but we were gone within 10 minutes of hearing those copters.

And then we hit crawling traffic. Everyone on the west side was fleeing the fire. Hundreds and hundreds of cars, trucks, and campers. I looked back at our housing area as I drove, barely comprehending the towering flames reaching over a hundred feet into the air.

According to a report by the California Department of Forestry and Fire Protection, "The smoke-and-fire tornado was about 1,000 feet wide at its base and shot approximately 7.5 miles into the sky; it reached speeds of up to 165 mph, with temperatures that likely exceeded 2,700 degrees Fahrenheit."

Several firefighters told me there was nothing they could do but get out of the way and let it pass. Not everyone was able to do that. Six people died.

We were evacuated for 8 days. Twenty-four homes on our street were destroyed, but a few survived, including ours. When faced with such a crisis and disaster, priorities change, and relationships with people take precedence over jobs, sleeping, eating, and writing. That's how it should be.

I promise I'll get back to it soon. Stories need to be told.

Check back soon
Once posts are published, you’ll see them here. 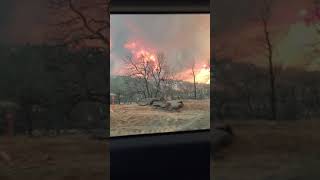 Description that Grabs the Reader